At Nineteenth and Master Street stood a church building which had dissolved as an active church, partly due to the passing of their pastor, The Reverend Frank Hasting. The church’s name was The Tenth Baptist Church. The neighborhood had changed from white to black and a suitable replacement for Reverend Hasting was hard to find. The building was turned over to the Baptist Union who in turn offered it to Tabernacle Baptist. They were overjoyed at the chance to worship in a real church, but because of the economic situation throughout America, the joy was short lived. The church was repossessed in 1932, and the church was divided. Reverend Thompson took most of the membership and the church’s name. With the help of the Baptist Union who made arrangements to rent the Nineteenth and Master Street building to the remaining members, another church was organized, thus began the formal history of The Tenth Memorial Baptist Church; named as a memorial to the past members of the Tenth Baptist Church. With One-hundred and seventy-five membership cards signed in December 1931, the church was reorganized and the Reverend Matthew A. Foster was installed as the Pastor of Tenth Memorial Baptist Church in 1932. After being Pastor for 5 years and 10-months, his tenure ended in 1937.

In 1937, a unanimous decision was made to call Reverend Allen T. Dixon of Daytona Beach, Florida who had preached a two-week revival at Tenth Memorial. Reverend and Mrs. Dixon came to Philadelphia in October of 1938.

The economic situation in the United States was looking up at this point. This new economic growth was reflected by the renewed growth of Tenth Memorial during the first decade under the leadership of Reverend Dixon. Mrs. Dixon was deeply involved in the ministry of the church. To pay tribute to this great woman of God, The Music Club was renamed the Rosa M. Dixon Memorial Choir after her untimely death in 1959. On November 12, 1967, Tenth Memorial paused to pay tribute to one of its outstanding members, Mrs. A. M. Turner. She served as church clerk for thirty-seven years. Through her efforts, such organizations as the Nurses Unit, and Senior Ushers and Ladies Auxiliary were organized.

When Reverend Allen T. Dixon died, Tenth Memorial fell into a state of shock. After a time of mourning, the church moved into action. Many ministers were heard during this time of transition. But the church was still without a shepherd.

On Tuesday, September 21, 1971, a church meeting was called to elect a pastor. On October 24, 1971, Reverend Woodrow W. Robinson was installed as pastor of Tenth Memorial Baptist Church. This was the beginning of a new era in the history of the church. On February 16, 1973, after a very brief illness, Reverend Robinson died from cardiac arrest. In March of 1973, Tenth Memorial was again looking, watching and praying for a pastor. The Board of Deacons appointed a Pulpit Committee whose members consisted of Deacon James E. Cauley, Sr., Paul Hagins, Russell Green and Kinzey Staley. Two ministers were selected as candidates, Reverend Lonnie Simon of Ohio and Reverend William B. Moore of North Carolina. May 10, 1974, was set as the day to vote. Pastor William B. Moore was elected overwhelmingly to become the next pastor of the Tenth Memorial Baptist Church. Thus begins a new era. Pastor and Mrs. Moore came as a team. They were united in ministry with a heart for the people of God. 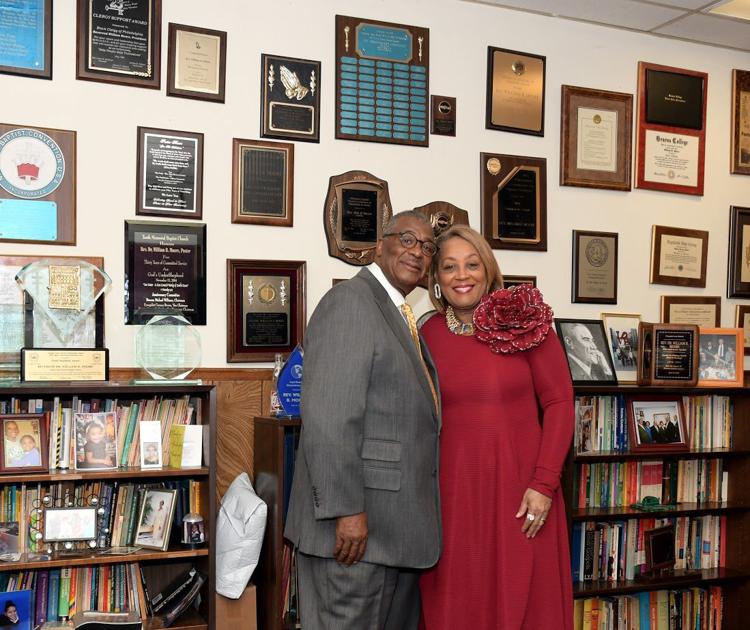 The senior pastor of Tenth Memorial Baptist Church, The Rev. Dr. William B. Moore, is joined by his wife Lady Pauline Moore inside Pastor’s office

On November 15, 1974, Reverend and Mrs. Moore moved into the newly renovated parsonage at 1848 West Master Street. The “action” which Is characteristic of Reverend Moore’s administration had begun. The presence of Rev. and Mrs. Moore acts as a catalyst for the total membership. Reverend Moore was installed as pastor of the church on Sunday, March 2, 1975. The Tenth Memorial had now become a church with a purpose that extended far beyond its four walls. The church was again threatened by fire on February 15, 1976, and once again Enon opened its doors. Much talent and individual leadership came to the surface in the year 1977. Without a doubt, we can affirm our Motto: “If God is For Us, Who Can Be Against Us?”

The new era brought many changes to Tenth. While the church was recouping from the fire, we could rejoice through the rubble. For the first time in its history, just a few months after the fire, a baby, Tamieka Nicole, was born during the tenure of the pastor.

Commitment and faith in a powerful God caused Lady Moore to sacrifice gainful employment at Westcode America to become the first Administrative Assistant at Tenth Memorial.

Through faith and prayer, God has abundantly blessed Tenth Memorial to become one of the great churches in Philadelphia.

The following represents some of the accomplishments made or continued at Tenth Memorial under the leadership of Reverend William B. Moore: 114 souls were added to the church in 1977, Tenth Memorial’s “Year for Christ”

1999 – Pastor was appointed the chair of the Foreign Mission Board

of the National Baptist Convention for the Tri-State area

Sept 2007 – Pastor was Co-Chair of Host Committee of the National Baptist Convention,